Since transitioning from a full importer to local manufacturer, Bailey Australia has rolled out a succession of models addressing the needs of most Australian caravan buyers, from large slide-out, grey nomad models to big family caravans.

Not only are they fully built in Australia (a big tick for many buyers), the Bailey vans offer two major points of difference from many of their rivals: full composite construction and lighter towing weights, so they’re suited to a wider range of tow vehicles.

More recently, Bailey has attempted to fill another gap in its line-up, with the introduction of the new entry level, sub-$55,000 Coastal range.

Available in four, two-berth layouts, the single axle Coastal models come with many of the features of the larger Rangefinder vans, but in a a lighter (two tonne maximum) and more compact package.

More importantly, it proved a perfect match when it came to towing. Weighing around 1600kg unloaded, the Bailey Coastal was well under the Mazda’s maximum towing capacity of 2000kg, while the van’s unloaded ball weight of 90kg also sneaked under the CX-9’s ball rating (100kg).

As a result, the whole rig cruised along happily at 100km/h on the freeway in fifth or sixth gear, with minimal pitching or swaying. Fuel consumption from the refined 170kW/420Nm 2.5-litre turbo-petrol engine rose from 9.0L/100km driving solo, to around 20L/100km when towing, although our route included plenty of hills. 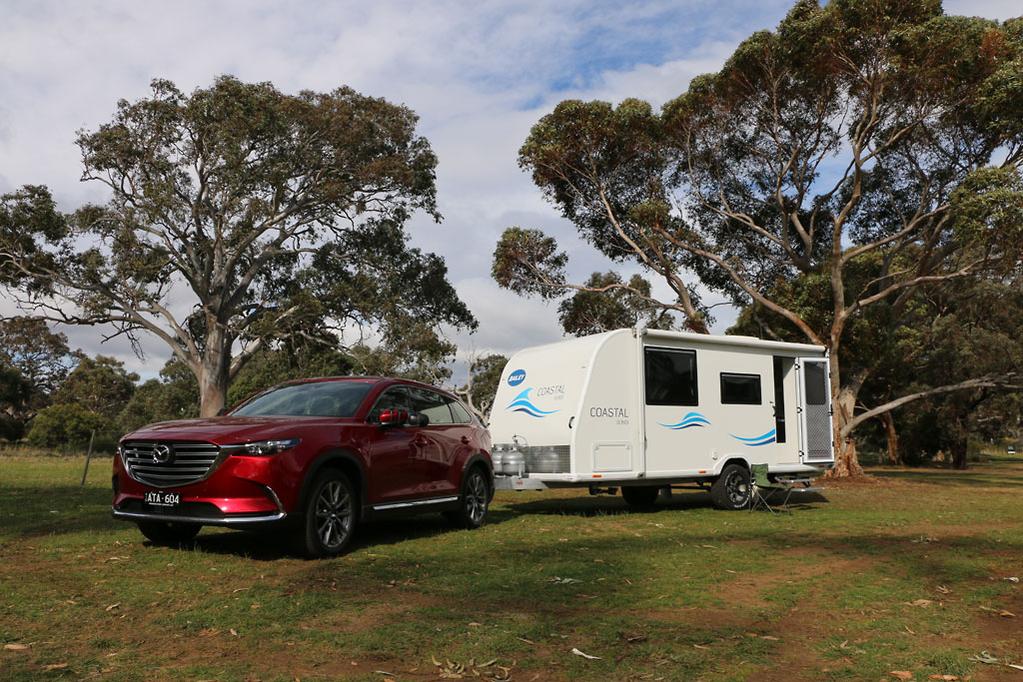 It might be the cheapest model but the Coastal benefits from the same patented Alu-Tech frameless monocoque construction and lightweight Duragal chassis as the rest of the Aussie-built Bailey range, along with a 50mm hitch, removable jockey wheel, leaf spring suspension, and two A-frame mounted 9kg gas bottles, included as standard.

Like most modern Aussie vans, there’s some shiny checker plate protection adorning the body (just a small strip on the front, in the Coastal’s case), together with decent ground clearance, although you’ll probably want to fit the optional Cruisemaster CRS coil suspension if you plan to regularly venture off the bitumen. 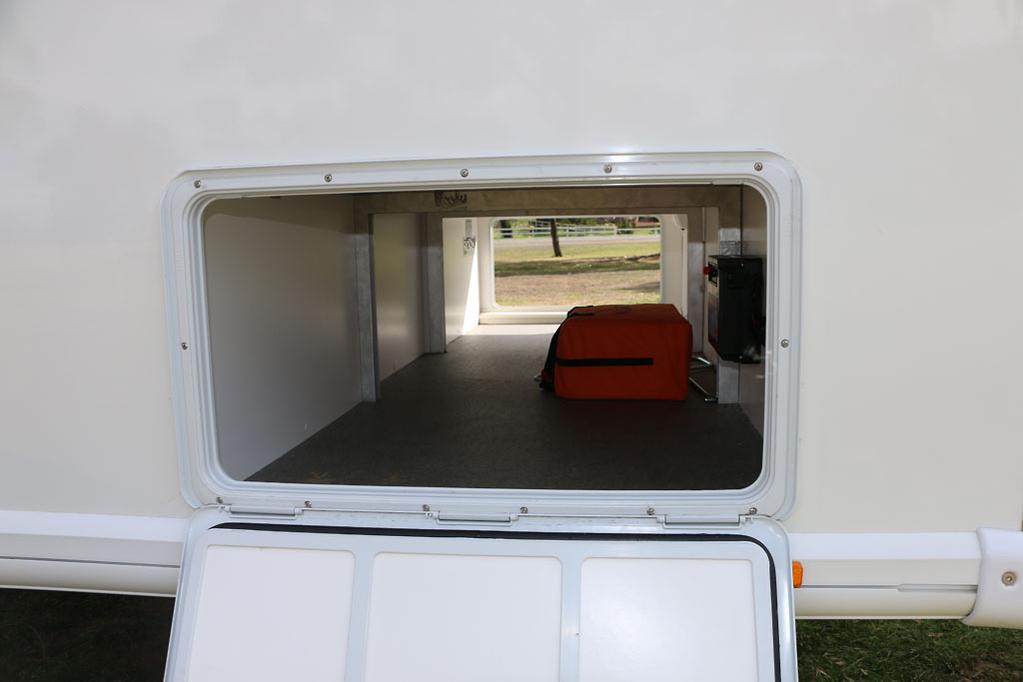 There’s also the obligatory grab handles at the front and rear, although in the lightweight Bailey’s case, you’ve got some chance of pulling it into position, at least on solid, level ground.

The Coastal also gets the same fresh water storage capacity as its bigger brothers – two 105 litre poly tanks, nestled under the glossy fibreglass-finished underbody – and a full width tunnel boot that could be big enough to store a BBQ. 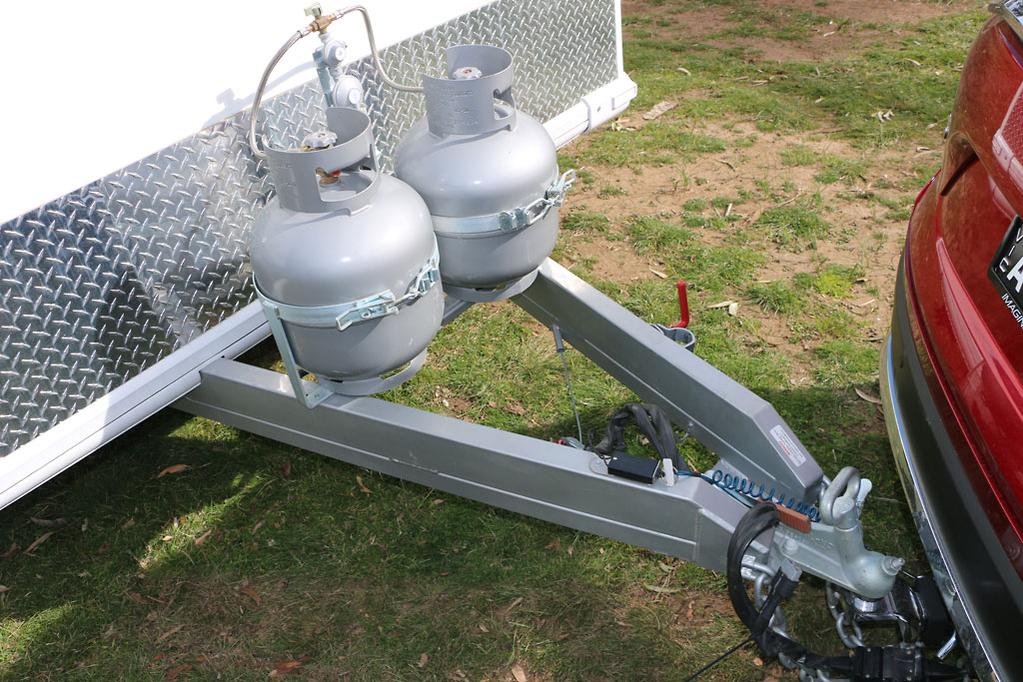 Protective caravan ‘bra’ is an option

There’s no rear bar, so you’ll want to pay extra attention when backing up, and the spare tyre is tucked up underneath, behind the axle. 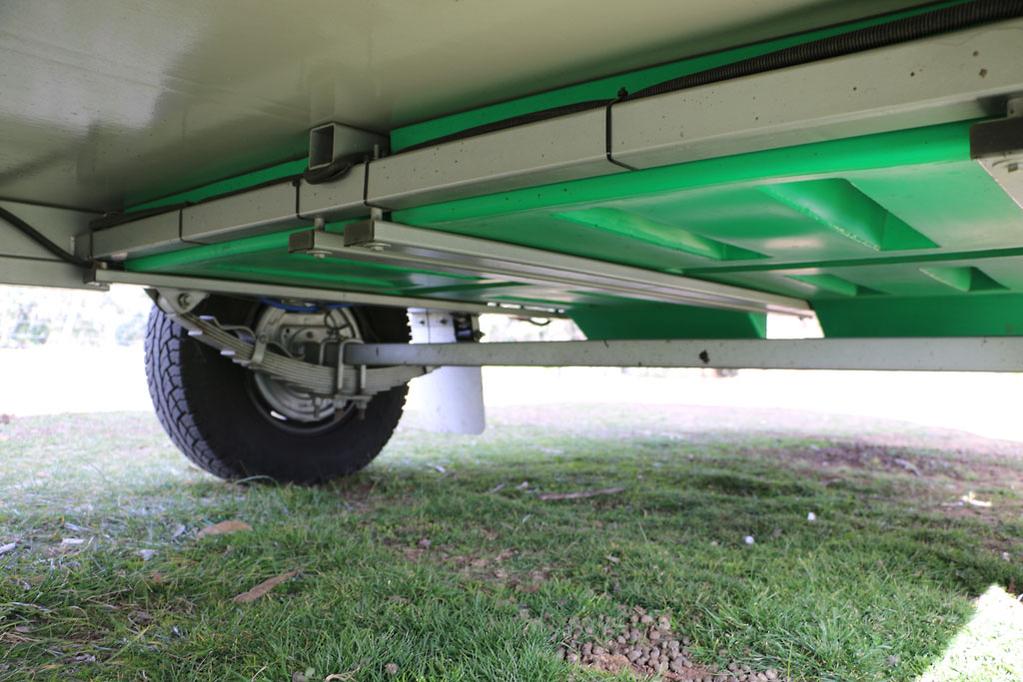 210 litre water capacity is above-average for a touring van

Like the exterior, the interior layout on the 17ft 4in (internal length), single axle Coastal Bondi, has a smart, minimalist theme, and despite the relatively compact space, covers off most of the basics expected in any modern, Australian caravan.

The rear-entry Bondi layout includes a walk-around, extendable queen bed at the front, with a compact kitchen and L-shaped dinette in the centre, and full width ensuite with separate shower and toilet up back.

Thanks largely to some sizable windows, two skylights and the fresh, modern beige/brown decor, it doesn’t feel too cramped or claustrophobic inside, while the scatter cushions on the leatherette seats, patterned cloth upholstery for the bedhead and wall pocket, and ‘frosted’ cupboard doors add some upmarket touches. 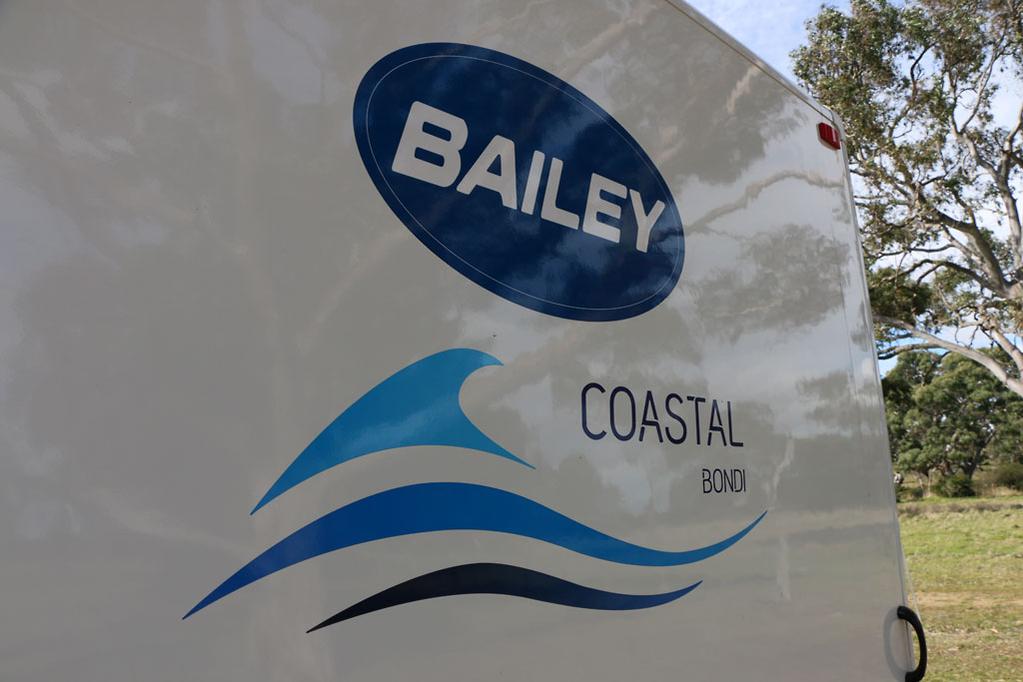 Positioned near the door, the L-shaped lounge/dinette is accessible from both ends and a good size for two people, as is the large multi-adjustable table.

Located at head height near the entry door are the water gauges, along with the audio player, with the two internal speakers located near the bed. The BMPro Genius battery management system can be found down low behind a cupboard door, near the base of the bed.

The coil-sprung mattress can be extended for taller people, although this will cut off the walking space around the foot of the bed. 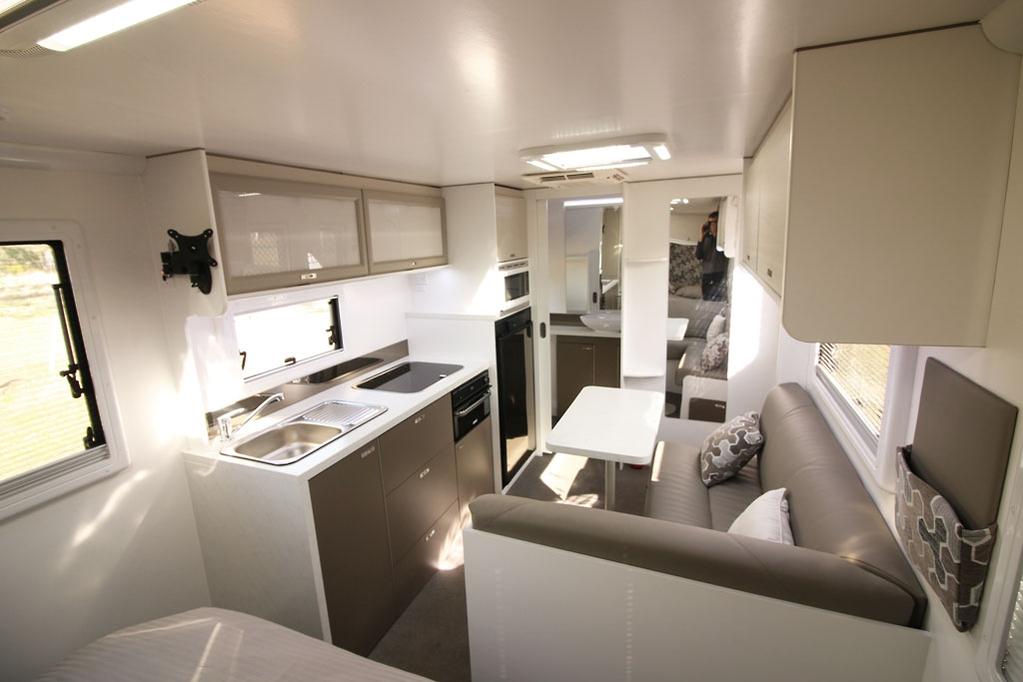 Other Coastal layouts come with a cafe dinette and single beds

Interior storage is pretty good for a medium-sized van, with some underseat storage space including a slide-out drawer, and a larger space under the bed, along with bedside cupboards, half wardrobes, and storage nooks with 240V and 12V sockets.

Along with two large overhead lockers, the kitchen gets three decent-sized drawers and a cupboard (alhough some of the space is taken up by the hot water unit) and the rear bathroom gets a largish, under-sink cabinet. 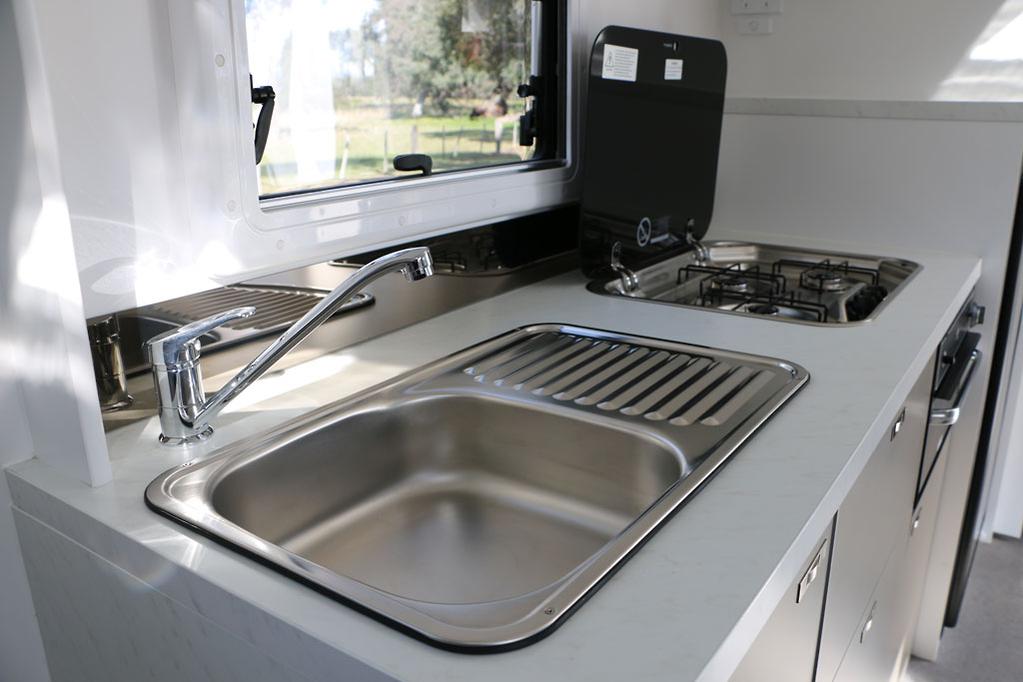 You won’t want to splash too much with sink so close to the edge!

Interior LED lighting is mostly limited to the two illuminated roof hatches above the bedroom and living areas, and two bedside reading lights. The Coastal Bondi also comes standard with a roof-top air-conditioner, although a 22in TV/DVD that can be mounted on a wall facing the bed, is an option.

The kitchen has limited benchspace but is well-equipped with stainless sink with mixer tap and drainer, three gas burner cooktop and grille, 164 litre three-way fridge/freezer and microwave.

The rear bathroom squeezes in a swivel toilet, vanity with weight-saving plastic sink and designer chrome tap, and a fibreglass shower cubicle with 12V fan hatch. 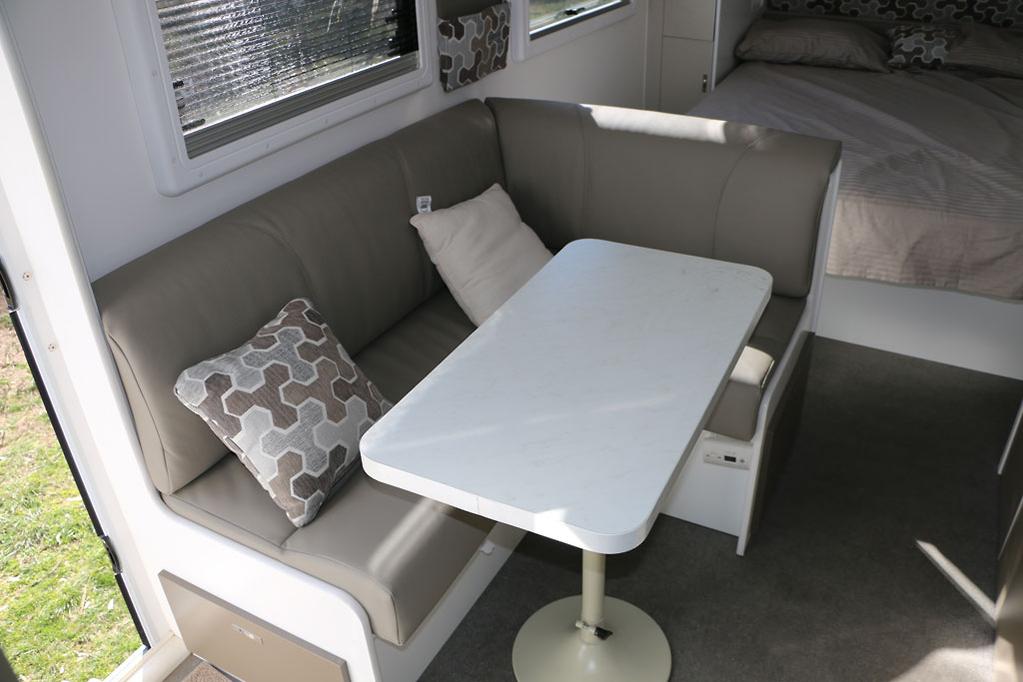 Due to its size/weight and price-point, the Bailey Coastal misses out on a few standard items found in many touring vans these days, like a washing machine, kitchen rangehood and pull-out pantry, TV/DVD, A-frame water tap, gas bayonet and dinette reading lights (although some of these are available as options).

The brand name appliances are mostly lower spec, although there is the option in some cases to upgrade to pricier versions. 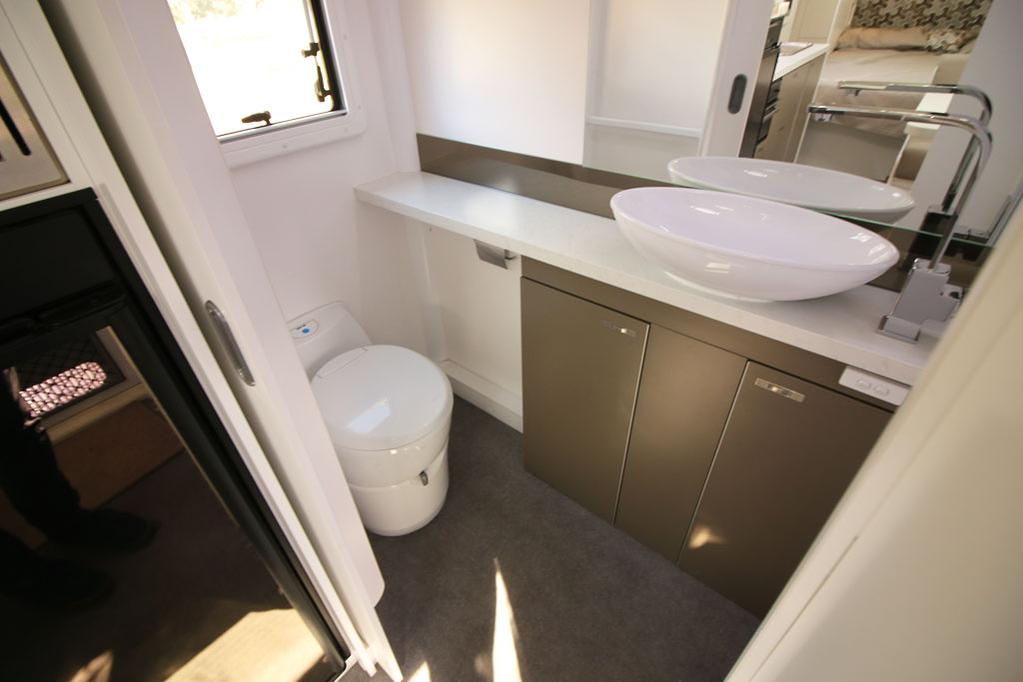 Coastal comes with a separate shower and toilet

However, the Bondi Coastal covers the basics well, with close to 2.0m interior headroom, solid, lightweight cabinetry plus some nice touches you don’t always see on pricier vans, like a full length mirror, a solid sliding privacy door, and a triple towel rack.

And how many Aussie caravans are covered by a 10 year water ingress warranty?

For those after a well-built, well-equipped and affordable Aussie touring van that’s light enough to be towed by a mid-size passenger vehicle, the Bailey Coastal ticks a lot of boxes.

Even if you do own a more capable tow vehicle like a dual-cab ute, the entry-level Bailey still makes sense for the extra towing safety margin, fuel saving and parking benefits it affords. 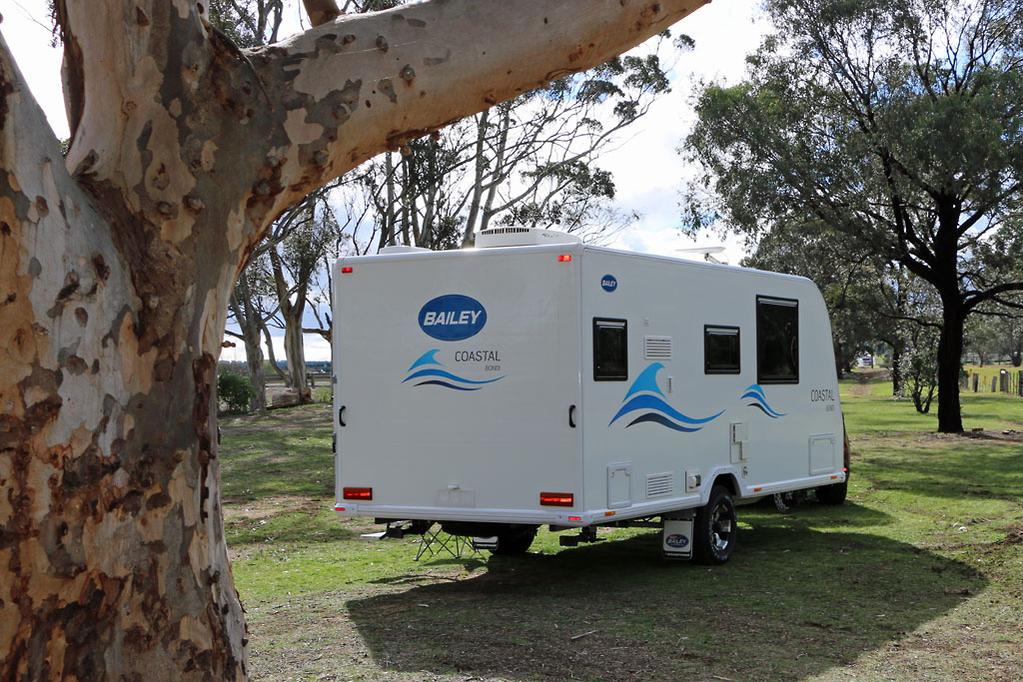 No rear bumper means the spare tyre is mounted underneath
Source: https://www.caravancampingsales.com.au/editorial/details/bailey-coastal-2018-review-114450/